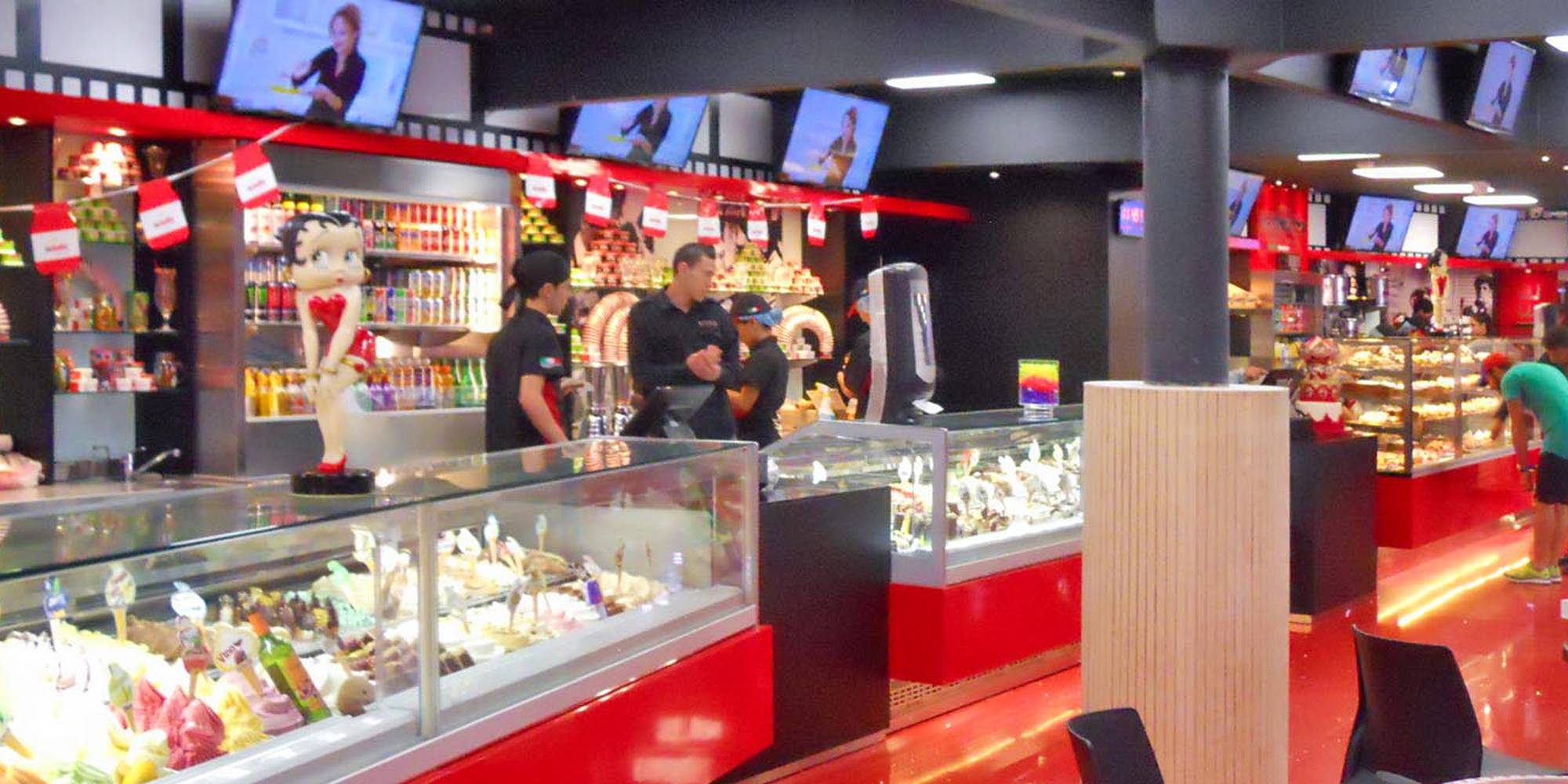 Alfredo Marando brought the cuisine of the Bel Paese to Venezuela. In his Cine Città locations, inspired by the famous Roman film studios, you can find the traditional foods and good humour of the Italian peninsula. 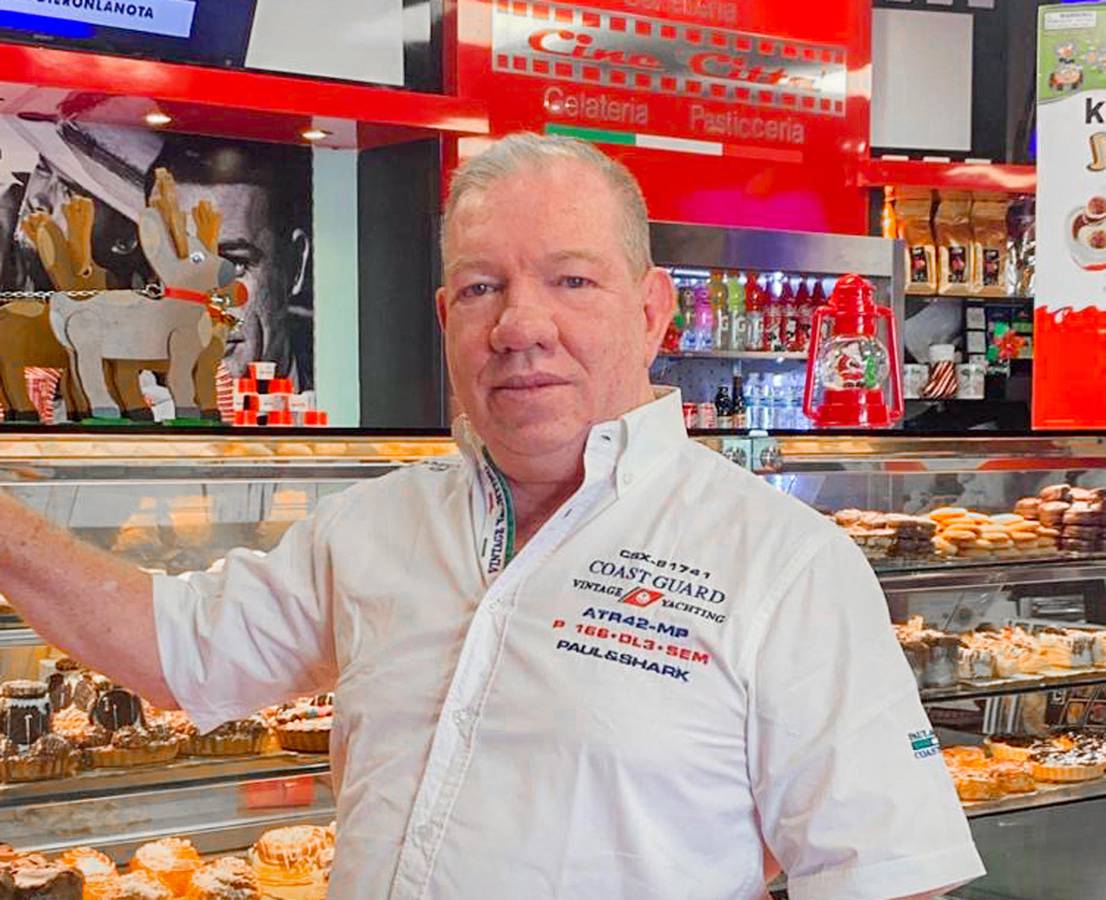 Ten locations established in the Venezuelan cities of Caracas and Isla Margarita, and a business with 185 employees. For Alfredo Marando, owner of the long-established chain with over 60 years of history behind it, the Italian spirit is expressed above all in the atmosphere of the cinema. That’s why he called his locales “Cine Città.” Delicious destinations with classic bar menus, pastry shops and pizzerias, as well as ice cream parlours and restaurants. More than half of the ingredients used in the preparations come directly from Italy to make the dishes more authentic and recognizable. On the walls there are gigantic photos of Italian characters such as Don Vito Corleone who have made cinema history, and images from old films. Some of the Old World’s most famous films were created in the Cinecittà studios in Rome and have helped to make the place the symbol of the Italian film industry. Many famous Italian directors and actors have worked in Cinecittà including Federico Fellini, Ettore Scola, Sergio Leone, Roberto Benigni, Luchino Visconti, Anna Magnani, Alberto Sordi, Vittorio De Sica, Sophia Loren, Gina Lollobrigida, Claudia Cardinale, etc..., but also many foreign directors and actors, including Martin Scorsese and Francis Ford Coppola.

And what could better represent the creativity of the Bel Paese?

The headquarters of the local Cine Città are located in Caracas, on the outskirts of the great metropolis, a place that has experienced rapid growth that has made it possible to establish itself internationally as an example of creativity and craftsmanship. And, along the streets of downtown, you can find numerous restaurants specialising in European cuisine: among these, Italian and Spanish flavours are in great demand.

The idea of the restaurant came from Alfredo’s desire to promote Italy in another country, more than eight thousand kilometres away. Traditional dishes, refined ingredients and the sunny smiles typical of Italy.

This majestic entrepreneurial undertaking carries the Aba Arredamenti name, in the company’s first overseas project. “I met Massimo Giaccherini while I was at my relatives’ in Poggibonsi. Many people talked to me about him as the best in the field of pastry shops, bars and restaurants and we immediately felt we were on the same wavelength,” says Marando. “I just had to explain myself for an hour and, with great intelligence, he immediately understood what I wanted to create. We have interpreted Italian style through a modern perspective, starting with the colours of red and black, inspired by the famous car manufacturer founded by Enzo Ferrari in Maranello. What is really important to me is that the space makes an impact but is always orderly, and always clean and tidy. The arrangement we have chosen together with Aba has managed to create this extraordinary environment that nods to the ‘50s. A good bet to try and attract a public that loves Italy and that perhaps has Italian origins like me.” Alfredo’s parents were both born in Italy and have always remained very attached to the culture and style of Italy. He was born in Venezuela but inherited this passion from them.

All of the furnishings were conceived and designed in Italy. Alfredi, who goes back to Tuscany at least 4 times a year, had the opportunity to be in touch with Massimo and the entire Aba team to propose ideas and constantly monitor the dream that was taking shape. Then came the production and assembly which was somewhere between the Old World and the New. Even for Aba, it was a challenging gamble, but one that was won through dedication and desire. The success made it possible to consider new horizons of creativity to bring to distant and unexplored markets. 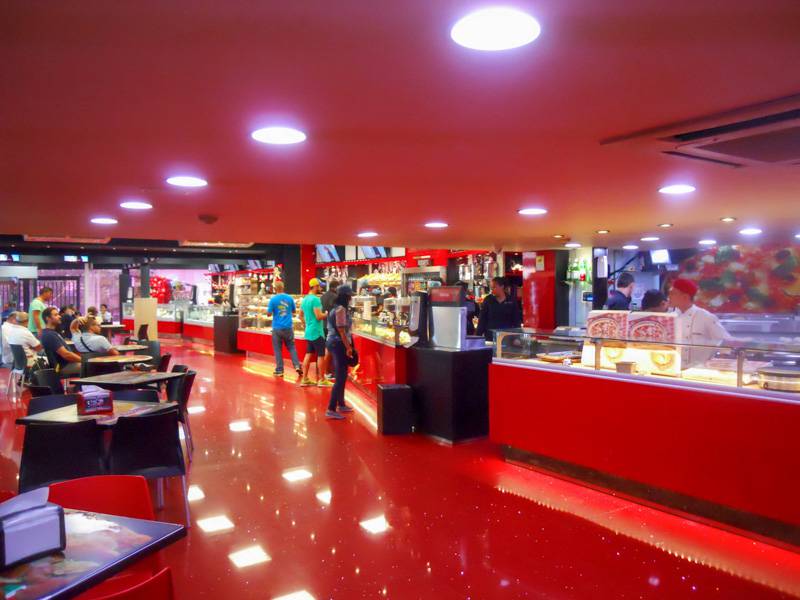 “We have interpreted Italian style through a modern perspective, starting with the colours inspired by Ferrari. The arrangement we have chosen together with Aba has managed to create this extraordinary environment that nods to the ‘50s." 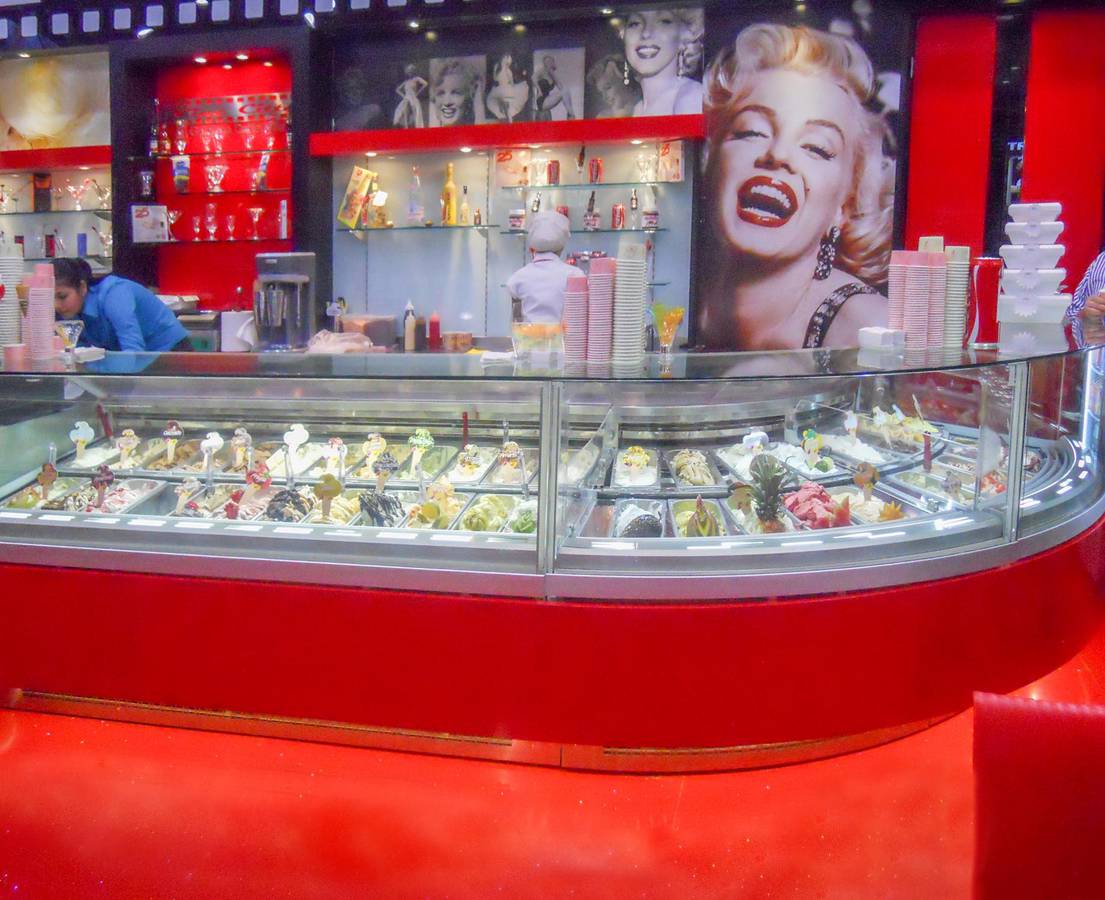 “Aba’s strength was the design, a winning concept and functionality for a country with work habits completely different from those in Italy. In fact, the oversight of the project at a distance of 8,000 kilometres and with just one local technician was very important. Not to mention the level of production which didn’t allow any margin of error.”

The historic Caracas headquarters is located at the base of the Polo 1 Center near the important area of “la Mercedes,” in a small building connected to the base of a skyscraper. “The 4-storey building,” Marando explains, “is completely covered in red glass, the predominant colour of the Cine Città concept. The architectural design is by Massimo Giaccherini and I’m really proud of it.” It has a surface area of 2,100 square metres spread over three floors, including a café, ice cream parlour, pizza, pasta, sushi, an Italian restaurant, an American bar and a market with Italian products. “Soon we will open the new Cine Città market of about 800 square metres on the fourth floor with a convenient 500-square-metre parking lot so customers can shop and then load their cars in complete safety.”

Although the social situation is not at its best at the moment, Alfredo Marando continues to believe in and invest in Venezuela and its great potential. The facts prove him right: the Cine Città brand has become a point of reference in Caracas for all Italians, as well as others.

And a new location is already in the pipeline, all that’s left to understand is which new chapter of the cinema will decorate its walls. 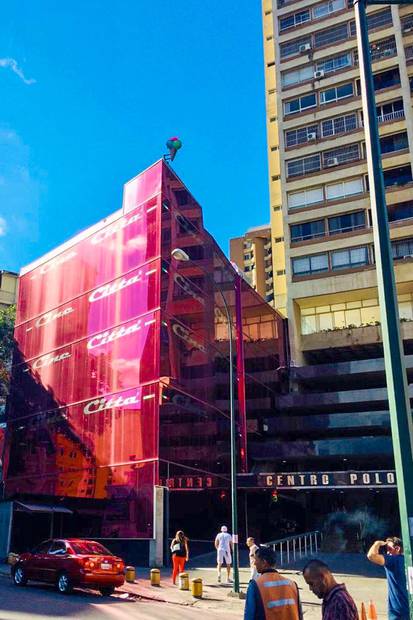 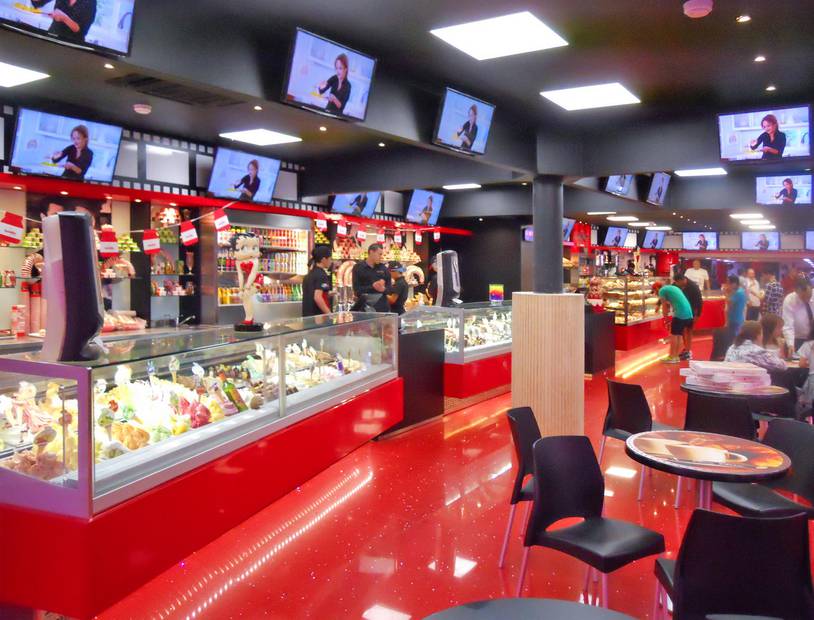 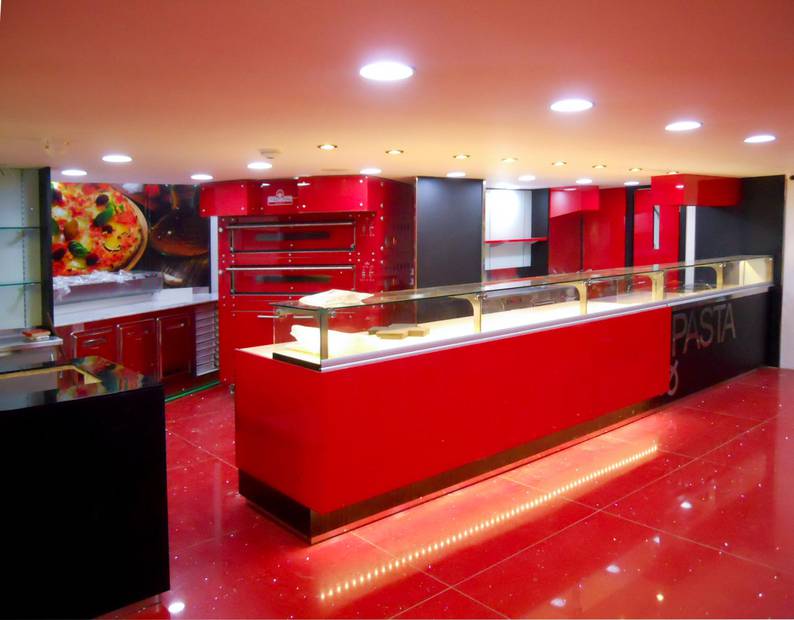 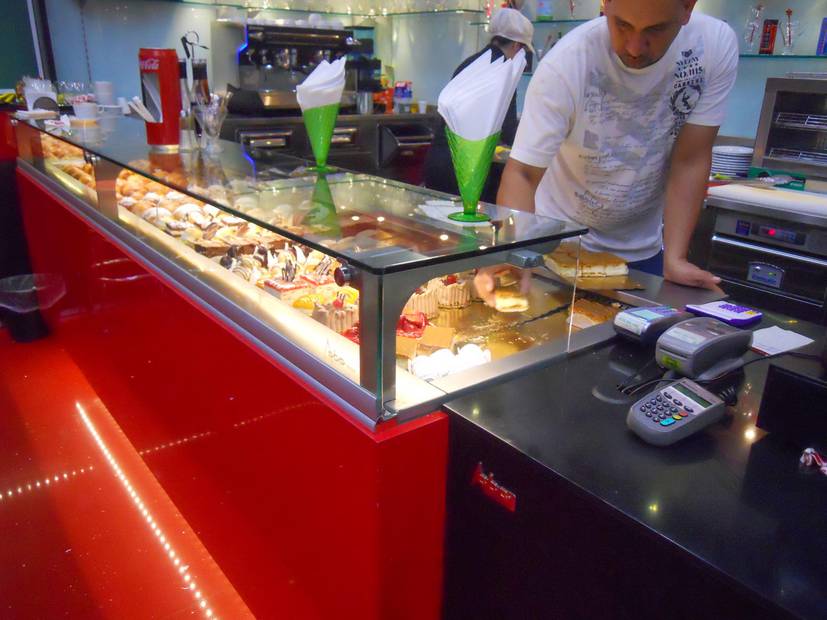 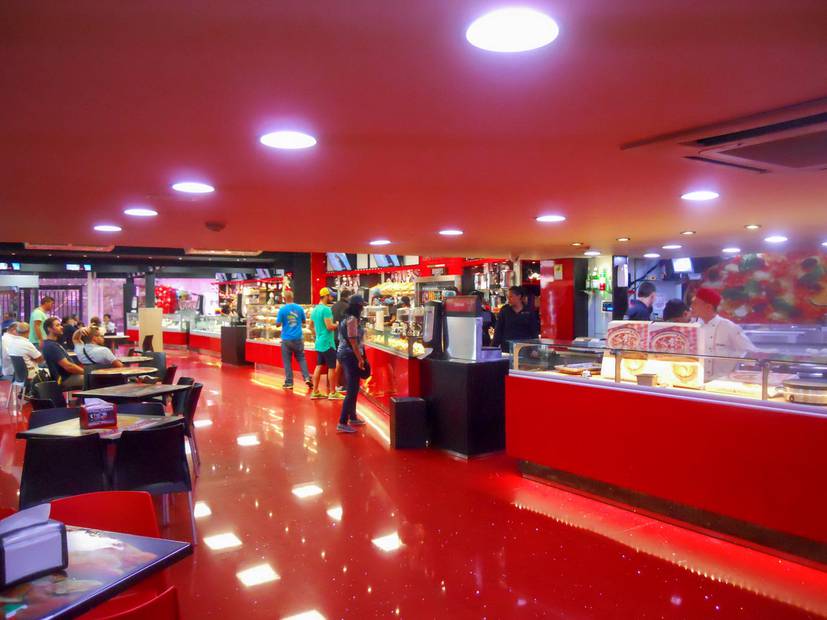